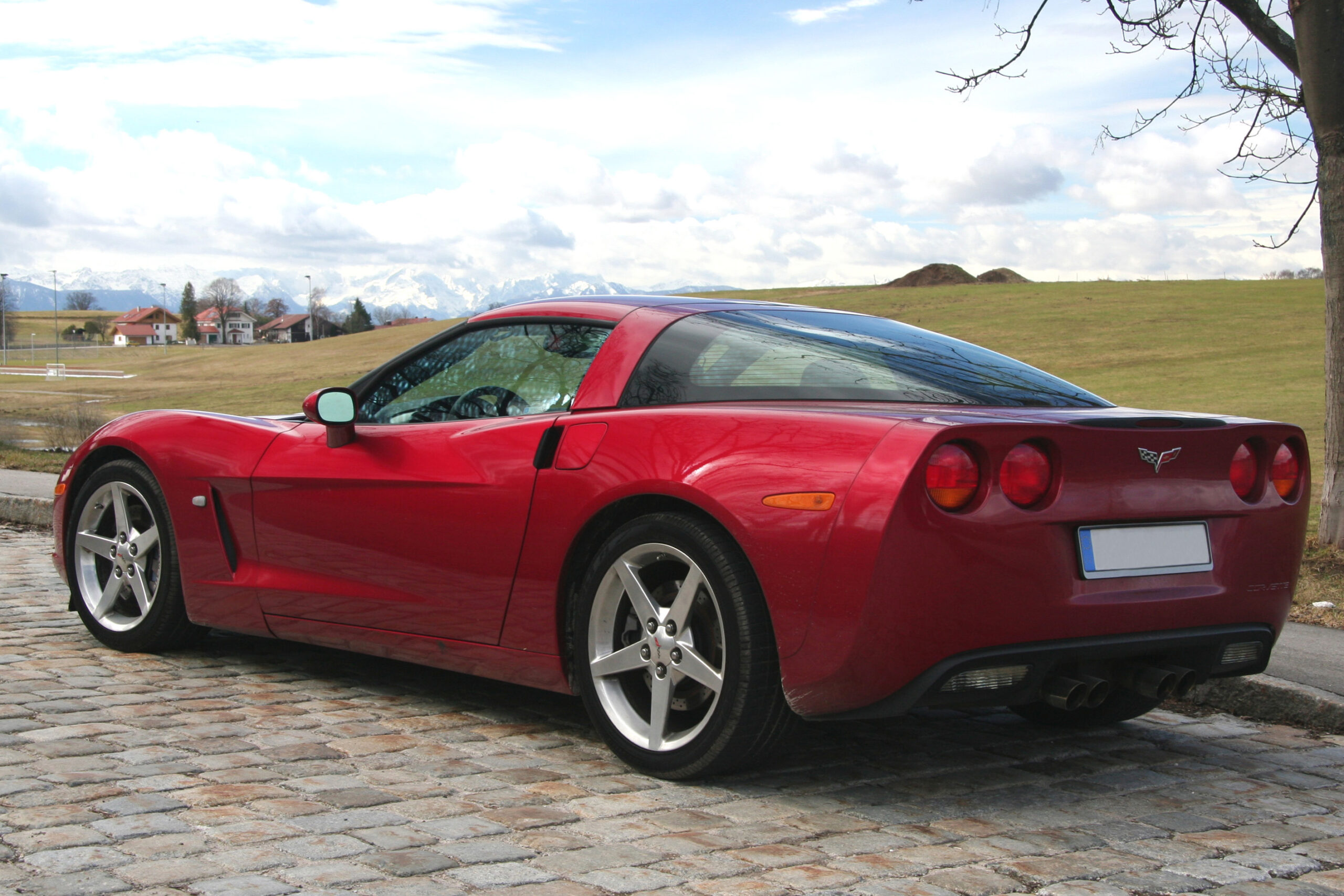 Okay, so I don’t entirely believe that. The Corvette interiors of the past definitely have problems, and they deserve criticism. That said, I think it’s completely overblown.

I’m a sucker for luxurious interiors that are user friendly, and I think many of us are. We seek refinement and comfort in many cars, from the most high performance vehicles to the most gargantuan SUVs. Even lower-end buyers seek a level of quality and spaciousness in economy car interiors. After all, all drivers experience the interior the most. However, a few companies have overlooked this throughout the modern car era, and one of them is the maker of my favorite car–the Corvette.

Yes, I’m talking about General Motors. From the base model Chevrolet Cruze in the past to even the late model Cadillacs, the General has never focused on the interior. They’ve instead preferred to cut costs and provide value elsewhere such as the powertrain and exterior design. This tactic has produced mixed results, with perhaps the poorest being the recent Cadillacs and the most successful being the Chevrolet Corvette.

People love to rag on the Corvette. “Oh it’s for baby boomers” or “I’ll buy one when I hit my midlife crisis” are common tropes. I’ve even encouraged my father to get one now that he’s hit the ripe age of 45.  But the truth remains that it’s an extremely economical car that ranks up there with the best in class in terms of acceleration, top speed, and handling for as low as half the price. Of course, nothing’s free though, and we pay with the interior quality. And every Corvette detractor loves to point out this sore spot. From the plastics on the dashboard to the leather seats that love to tear over time in many older Corvettes, they definitely have a point. But is it that bad, so abysmal that it overshadows the value of the car? Or is it worth putting up with?

Where It All Started 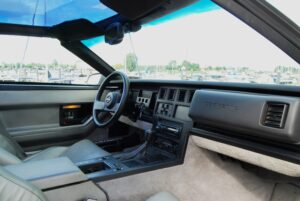 In the 1980s, we had the venerable C4 Corvette, which lasted for over a decade. While quite innovative in its earlier years, this generation definitely showed its age by the mid 90s. However, General Motors nearly had to kill off the Corvette due to growing financial issues. Engineers fought to keep the car in production, and in 1997, GM released the C5 Corvette. It featured many improvements in terms of its powertrain and handling qualities, and a modernized design in the typical 90s style. However, to get the car past the bean counters, the designers significantly cheapened the interior. To be fair, no Corvette boasted a stellar interior, but they always provided a decently well built if not beautiful passenger environment as seen on the left. This new car was a whole other story though. 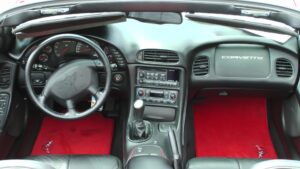 With a dashboard consisting of plastics that wouldn’t be fit for a LEGO set, the C5 interior started off with a rough first impression, as seen in the picture on the right. But that wasn’t the only fault, since many cars during the 90s featured plastic. However, the Corvette was special. Press one of the oddly shaped buttons on the radio, and the entire stack would creak. Or let your gaze wander to the left side of the gauge cluster, and notice the gap between the dashboard and the door. It’s large enough to fit many fingertips through. Plop down in the seats, and you’d slide around like you’re on an amusement park ride every time you take a corner. This interior didn’t belong in any car, let alone a $40,000 (at the time) sports car.

It Got Better Over Time 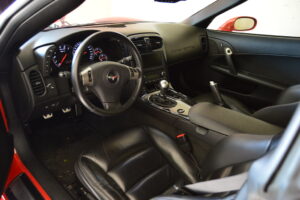 The C6 Corvette in 2005 brought many improvements to the interior, but it still wore signs of mediocrity, especially as the car rose to the $50,000 range at base price. Many of the same issues still existed, with marginally improved plastics and a new fault. It featured a navigation system that’s horribly outdated by today’s standards. But to be fair, the same can be said of any computerized technology from 2005. The point remains that the cost cutters at General Motors still restricted the quality of the Corvette interior. 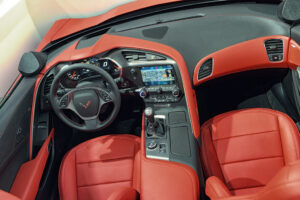 Eventually, the C7 Corvette finally brought along a much improved interior. Not perfect, especially as the price now headed towards $60,000 at the base, but good enough. Still mediocre compared to the other cars in its class like the Porsche 911, but to be fair the base model was half the price. Of course when one stepped up to the range-topping ZR1 model, which cost $130,000+, the car disappointed buyers with the same interior quality. The performance still more than compensated for it, however. 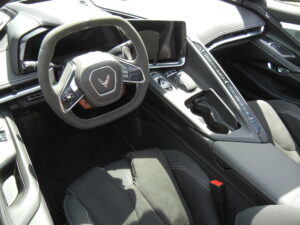 The stigma of poor interiors still remained until the new C8 Corvette for 2020 finally brought along a world-class interior, perhaps the first in a long time from any car produced by General Motors. Wrapped in cloth and other premium materials, the dashboard finally lived up to and exceeded expectations. The tolerances are tight, and the screens and technology are finally modernized befitting a premium sports car. Honestly, this image on the left doesn’t do it justice at all, it’s beautiful, and not just for GM. It took them 25 years to do it, but they finally created something great. I hope they keep up the new standard.

Why Did They Suck for So Long?

Now that I’ve gotten out all the criticisms, one can see it’s quite easy to rag on the Corvette. It’s an underdog, a car that doesn’t feature the status of a Porsche or, obviously, a Ferrari. But it’s something special, it represents a car that’s extremely achievable. It’s relatively affordable, even new. Mind you, a base price of 60 large is not “cheap” by any stretch of the imagination, but it’s something an upper middle class person can achieve through budgeting. 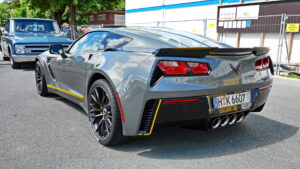 This is thanks to the bean counters that insist the Corvette share components with trucks and SUVs when possible. In addition, the mass production of the car is a major factor to its low price. And of course, we also have to thank the cost cutters that insist the interior be made less of a priority. Prices are kept down, expenses are recuperated and profits are generated  thanks to these strategies–all of which kept the Corvette alive even during many economic struggles.

Corvettes are quite reliable, not to the level of the Toyota Camry of course, but to be fair almost nothing is. Yet for a performance car, the Corvette proves extremely durable, as their LS engines are famed for being essentially bulletproof. In addition, parts are cheap because they’re often shared with other vehicles in the lineup, as mentioned earlier. Practical and relatively comfortable (for a low sports car), the Corvette provides enough space for two people over six feet tall and room in the trunk for a couple’s week-long vacation. Again, this doesn’t dispute the fact that quality-wise, the Corvette interiors of the past aren’t great. That said, while cheaply made as pointed out, the interiors feature a logical layout and intuitive controls. Few complaints exist about interacting with a Corvette, which isn’t something one can say about many cars.

And that’s just the boring practical stuff. Keep in mind the new C8 Corvette does 0-60 MPH in UNDER 3 seconds. That doesn’t imply the older models are underpowered though–the older C7 and C6 did 3.7 and 4.0 seconds respectively, and those figures simply represent the base models of all three generations. They all have a top speed in the 190 MPH range, which is incredible for the price, and they all pull nearly 1.00 g on the skidpad, leading to impressive cornering abilities. Oh and of course, the glorious exhaust note of an LS/LT engine is reason alone to love these cars, which comes with all Corvettes from the C5 onwards.

I Love These Cars

The older Corvettes featured rawness and simplicity, with plenty of performance even if they were a bit rough around the edges. I love that about them, it ensures the cars feel connected to the road, like I’m a part of it. I’ve driven a C7 Corvette and I felt the connection and the surge of adrenaline every time I accelerated like nothing else. And for those who find that wildness a detractor, the new C8 features refinement as well now, with one of the smoothest rides in a sports car. Did I mention that one can buy a C8 for $60,000? Or that one can buy a C6 used with decent mileage for under 30 grand, which is less than a new Honda Accord?

I specifically mentioned the C6 as I have a soft spot for that generation, and in fact, I plan to buy one when I graduate. It’s my attainable dream car, and I’ll eventually write a love letter on this blog to the car. I don’t mind the interior’s mediocrity. The cheapness and clunkiness lends a certain charm to it for me, as does the rawness and the power. The affordability and accessibility doesn’t hurt either. It’s simple, reliable, and easy to drive and that’s the charm of the Corvette for me. In conclusion, the interior isn’t awful. It’s simply a reminder of why people like me can afford these amazing machines and experience the performance that’s normally reserved for the most expensive cars.

To check out my other posts, please click here.

I'm a car enthusiast who's sharing some of my opinions on the automobile world. I hope to own a C6 Corvette in the coming years.