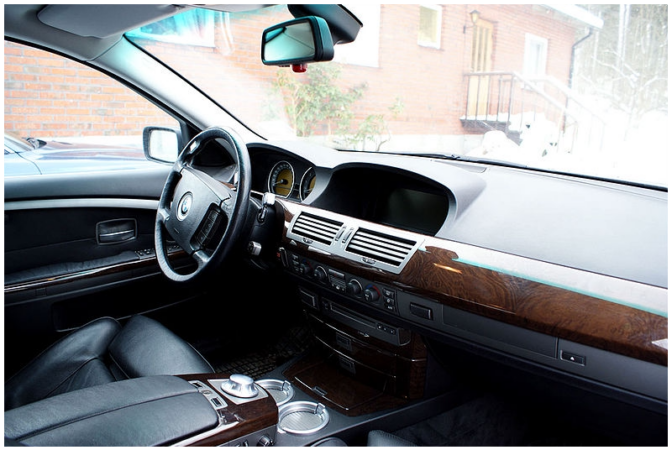 I tend to read car forums and blogs, especially those with comment sections a lot, maybe too much. I’ve wasted many hours during senior year just learning about people’s opinions; they’ve always fascinated me for some reason. And of all the car companies, BMW has one of the most ardent yet opinionated fan bases, with many different points of view. This creates diversity, and yet one opinion I’ve seen repeated to death is the “end of BMW”, how they’re going down a path chasing rich customers over car enthusiasts by making their cars more luxurious and less “connected to the road”. And I’ve read that the era of this transition, the loss of their core values, occurred in the 2000s. It’s easy to see why–they brought in more technology than ever before to the detriment of the user experience (at first), but I believe there’s more to it than that. I won’t dive too deep into the debate of whether or not BMW has truly lost their way now, but I disagree with the idea that the 2000s ushered in doom and gloom. In fact, I think that this era was the most exciting of BMW, filled with innovation and turbulence, and that’s what I want to dive into today. 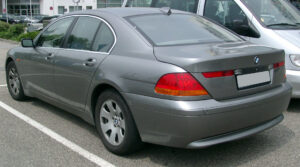 In 2002, BMW first brought the much maligned overhaul to the 7 series. They introduced a new design language, one with a more flowing, yet controversial structure. It was especially maligned because it was “flowing” until the rear, which has a clashing trunk-lid and taillight design. This debacle is the “Bangle-butt”, a mockery of the designer Chris Bangle. I won’t share my full thoughts on this here, but I will say I get where the name comes from and leave it at that. Inside the car, however, was perhaps the greater “misstep” of the company. 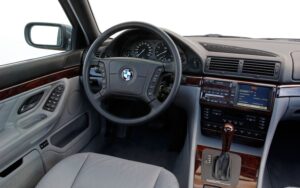 For years, BMWs were known for a rather simple, sparse interior, focused on build quality and easy operation of controls. The build quality of the interior remained and was only upped. This is seen quite clearly in the picture on the right of the E38 7 series, the previous generation of the car. The interior of the previous generation simplistic controls and they are mostly buttons. But for the E65 generation? The existing design was thrown out the window. 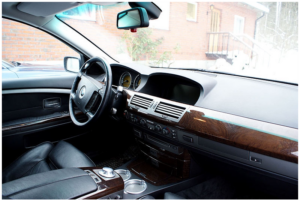 The new design was significantly more luxurious, which greatly improved the 7 series’ upscale status on the luxury market, but with the revamp, complexity was added to the controls. In place of the tried and true radio stack, a new iDrive system was introduced, which was one of the first truly modern infotainment systems, with a screen, the rotary knob which is now synonymous to BMWs, and a complex (for the time) system that required you to insert a key fob into a slot and press a button to start the car rather than a simple old key. These systems introduced complexity, buried many options/controls in menus, and simply made discovery and operation, especially while driving, near impossible. People felt this was blasphemy to the prior generations of BMW where the driving experience was prioritized above all, and the designers simply included what was necessary to control the cars basic systems, interior comfort features, and not much else, all accomplished with buttons and switches. Thus these changes brought about much uproar and backlash towards BMW.

And yet the funny thing is, all those features I mentioned above just sound familiar…nearly every modern car in the last five years, from a Sentra that you can rent at Hertz to a new 7 series, has some form of infotainment and a keyless entry/start system. BMW obviously had a very dated system at the time, but it was the baseline for iDrive and kept getting refined over time as it trickled down to the lesser models such as the 5 and eventually 3 series, leading to the systems we have today with Apple CarPlay, Android Auto, etc. It’s undeniable that BMW changed the landscape of car technology.

Now sure, maybe BMW made our cars significantly more complicated to operate than the 90s where we just turned a key, shifted a lever, and drove off. However, they also delivered a fantastic ode back to the past with perhaps their greatest line of M brand machines of all time. 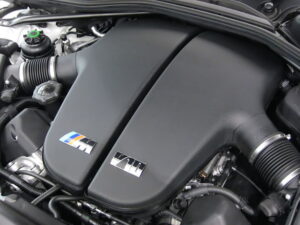 In 2005, the E60 generation of BMW M5 was released, and the design was controversial at the time, of course, in line with all their other designs at the time. But the highlight was what was under that design, the screaming, naturally aspirated 5.0 L V10 with an output of 500 HP. Yes, you read that right…A V10 IN A FAMILY SEDAN WITH AN 8250 RPM REDLINE! That is something we had never seen before and likely will never see again. Just listen to the gorgeous soundtrack, the likes of which we’ll never hear again either. This was insane from BMW, usually known for outputting rather powerful but stoic and “serious” powertrains. 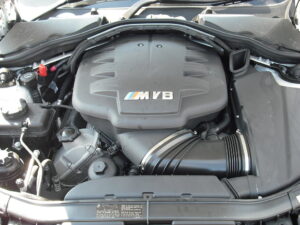 2005 wasn’t the end of it though, with BMW releasing the M3 in 2007 with a slightly smaller engine, the 4.0 L V8 that also had a sky-high redline and screaming exhaust note . These were out of left-field from BMW, and we’ve never seen this since, with the company returning to a more conventional turbocharged V8 and I6 for the M5 and M3 respectively since to create more power from smaller, more efficient engines. It’s great for customers and better for the environment, but the part of me that loves the raw exhaust note of a naturally aspirated engine will truly miss this era.

And yet of course, this was also the time where BMW decided to give us, with those same amazing engines, some of the most problematic, unreliable powertrains they have ever delivered. The V10 and V8 featured throttle body actuator issues, as well as rod bearings that simply decided to chew themselves up and grenade the engine, sometimes even before 50,000 miles. Oh and don’t think replacing the engine is a pain-free experience, as at upwards of $20,000 your wallet will not agree with you. It turns out that BMW built these engines with extremely fine tolerances, and required thick oil to lubricate the parts, which led to a combination of poor design as well as hard driving, as these performance cars are intended to be driven, causing destruction and unreliability. Oh and aside from those, be prepared to deal with the usual BMW issues of oil leaks and cracking hoses…all the things that make owning a BMW a rather love/hate affair except taken to the next level.

BMW is always going to have its luxury brand “snob” status associated with it. But to car enthusiasts, the company generally meant much more, it was a creator of cars that communicated with them, even if it meant dealing with more expensive repairs and extremely complicated mechanics. But most feel new BMWs are drifting away from this idea, and are focused more on luxury rather than the driving experience alone, and there is some truth to that with the electronic steering and sound insulation of newer models reducing the feel of the road. It’s like the BMW of the 90s and earlier being a kid and living life with the basics but riding high with excitement, while the current state of BMW is like a grown up adult with distant memories of the past. But the BMW of the 2000s, on the other hand, is more like a wild teenager who was forced to mature but also wanted to enjoy even more, hence the blend of turbulence and innovation. The cars had technology that was awkwardly shoehorned in that eventually got polished to what we have today, and yet they had their most ambitious engines in BMW’s history, much to the dismay of customer’s wallets but to the excitement of car enthusiasts around the globe. I wouldn’t say that reaching one’s peak as a teenager is the best life advice, but perhaps that’s what BMW has done, and if so, that’s a shame. That really depends on who you are as a driver and what you seek in a car. But one thing’s for sure, 2000s BMW represents that rebellious teenager I know I shouldn’t be with, and yet that’s exactly why it draws me like no other era of BMW has and ever will.

I'm a car enthusiast who's sharing some of my opinions on the automobile world. I hope to own a C6 Corvette in the coming years.